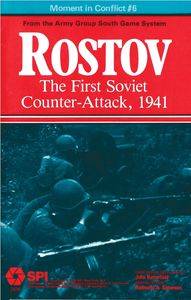 This marks the sixth installment in SPI's Moment in Conflict Series for the Army Group South Game System. Rostov is an operational simulation, which recreates the pivotal battle of Rostov in 1941. A battle which saw the Germans actually take hold of Rostov, only to be driven out within weeks by wave after wave of Soviet attacks.