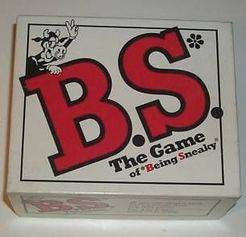 Just how good a liar are you? Could you convince your friends that Benjamin Franklin actually wanted the turkey instead of the eagle as the American national symbol? Could you make them believe that it was a guy named Thomas Crapper who invented the crap game? Or was it the flush toilet? The problem with most games is that you have to tell the truth. However, to play "B.S., The Game of Being Sneaky", you decide for yourself whether to be truthful, or maybe tell a little fib. You could even try a whopper to pile up an extra score or perhaps spin a tale of your very own to shovel in some helping bonus points.