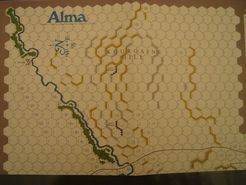 Crimean War Quad: Alma - The First Battle, 20 September 1854 "Alma is a simulation of the first battle of the Crimean War. Alma was the only battle in which the entire armies of the three major belligerents (England, France, and Russia) were involved. The British and French had landed on the West coast of the Crimea only a few days before and, had they been defeated at Alma, thousands of lives might have been saved and the war ended." 1 17" x 22" color map with matte-finish backprinted counters 32 Red British 32 Blue French 34 Green Russian 12 Game turns