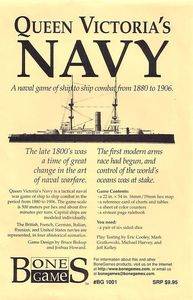 Queen Victoria's Navy is a nautical combat war game for two players which simulates the period from 1880-1906. The game scale is 500 meters per hex and about 5 minutes per turn. Capital ships are modeled individually. Complexity is medium. Time to learn is from 30-45 minutes. Players take the role of squadron commanders, the principal tactical leaders in the battle fleet. As such, they are in charge of a manageable force of capital ships, generally 3-12. Designed for 2 players, Queen Victoria's Navy is also suitable for solitaire or multiple players, each scenario taking about 1 hour to complete. This game manages to blend three often contradictory goals together seamlessly: affordability, game-play, and authenticity. The focus of the game is to recreate the conditions of a capital ship battle. Torpedo boats, gunboats and sundry other smaller vessels have been left out of the game as they were not critical components of the Battle Fleet concept, and their inclusion would have added complexity and cost to the game. However, thanks to the simplicity of the rules, it is an easy task to design these craft for your own games.