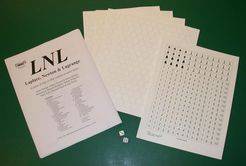 BoneGames produces a number of do-it-yourself free games. You download a PDF containing rules and components, and print out what is required for play. LNL - Laplace, Newton &amp; Lagrange (briefly known as DeltaVee in its early stages) is a game of ship to ship combat in outer space. Using a unique movement system that forces players to deal with momentum, and a fast and simple combat system, LNL is a great addition to the space game genre. The game involves combat between the Moon and Earth, with individual ships represented by each counter. Each side has from 3-8 ships. Each ship has a log covering armament, fuel, engines and defence. These logs are reminiscent or the Task Force Game 'Starfire', but have fewer options, but a more sophisticated layout. The heart of the game is a vector-momentum system (like the one in Yaquinto's Shooting Stars or SPI's Vector Three). Ships have a facing, use fuel to thrust towards the current facing, but speeds carry over from turn to turn. Therefore ships can only decelerate only by turning and thrusting in the opposite direction of travel. Speed is marked by placing numbered counters in the relevant direction. Combat involves the use of missiles, guns (i.e. projectile weapons) and lasers. Missiles are launched and move much like ships. They are more manoeuvrable, but have a limited amount of fuel, used for acceleration and turning. As a defence ships may have point defence weapons. Guns and lasers are ranged weapons, with different arcs of fire, but essentially the same resolution. Damage is assessed by throwing the requisite number of dice - any dice will do, or even coins - the game using an EOR (even/odds randomiser) - with odd rolls yielding a hit. Damage is then marked off the ship, with the affected area depending on the side through which fire was taken. Each side (Moon and Earth) has a choice of 8 types of ships and 5 basic scenarios are available, each with a great deal of flexibility. Tactics can be involved and subtle. The interplay of weapon types makes this an exciting game. It is easy to learn and has great variety.