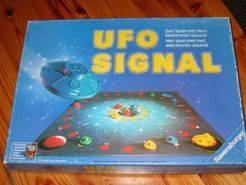 The object of the game is to be the first player to fly all four of their UFO's from outer space and land on Planet Earth. On your turn you cover your eyes with the mask provided while the player on your left picks up the big UFO from its 12 o'clock starting position and circles it clockwise over the board. As long as the UFO is in the air you can hear it "beeping". The UFO must circle the board at least once before landing in a new location. Now you have to guess which number it landed on by guessing where the beeping stopped. If you guess correctly May do three things. You may move your own UFOs up to 5 spaces around the board aiming for earth. The five spaces movement may be distributed over your pieces at your discretion. You may Move the Large UFO to a new location and you can also "ZAP" another player back into outer space. If your guess is wrong, the other players get a free move of five spaces each. Pieces can be moved in either direction and landing on another player's piece will block them from moving. The stacks can be many pieces high you you can park multiple UFOs on other players. Another thing, the Large UFO can be leapfrogged towards the center. So being able to move it can give you an advantage.