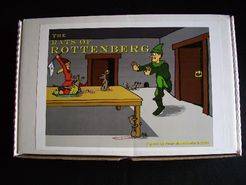 Overview: Castle Rottenberg is infested with rats! King Alfred has hired the best rat trappers in his kingdom to rid his castle of the lowly vermin before his Queen returns. The problem? The Queen will arrive in only six hours! The rats have to be taken care of...and soon! With a little bit of the Wizard’s magical help and your own wits, you attempt to impress the King with your abilities. But the Wizard also has an interest in what you trap. Will you be able to match wits with your competition and secure the rights of trap master in this land? Can you catch the vilest and most numerous of rats and secure your position as a member of the King’s loyal staff? Goal of the game: The players will move from room to room trying to trap as many of the rats as they can, by using magic items and outmaneuvering their opponents. The rats have three point values depending on their degree of nastiness: 1: plain old rat 2: aggressive rat 3: diseased rat The rats also come in four colours: black, white, grey, and brown. Most of the valuable rats are of black colour, followed by brown, grey, and white. This may lead some players to choose to pursue only black or brown rats in their quest. However, the Wizard is a strange sort and wants to use the rats of all colours for his potions and magic. He rewards players handsomely for having rats of each colour. Keeping in mind that the white rats are the least common, and the black rats are most numerous, it is the rat trapper who can balance the best of both strategies who will ultimately win the game. This game features a very innovative game board design: a northern cross section of the castle is one one side of the board, and the southern cross section of the castle is on the other side of the board, in such a way that the roofs are almost touching. Each room presented on the cross sections have doors leading east/west/both, but also have a door set into their back wall of the room which leads to the other side of the board and the other cross section.