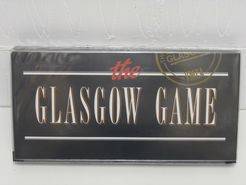 THE GLASGOW GAME is one of a series of Monopoly style board game developed by local YMCAs in the UK to generate funds for their activities. The games in the series are essentially the same, but as in the different versions of Monopoly, the board and the businesses are specifically themed to the town or city represented in the title - in this case the City of GLASGOW in the Heart of Scotland. The YMCA there is famous for its large hostel, housing some 400 young men. This game is distinctly different from the other Ricken/Triaktiv games being predominantly Black in colour where the norm is a green or plum colour. See the pictures for greater detail of this. Players progress around the board as a result of the roll of 2D6. When landing on a Company square a player may purchase a share in that company (there are two shares available in each company), if he wishes. If not he may put the share up for auction, with any excess over the sale price being retained by that player as his fee for being the auctioneer. Players landing on companies that are already owned must pay to visit, with the payment due being based on how many shares are owned in that particular company and in the other two companies in the same colour series. Since shares can be owned by two different players both may demand payment from a visitor. Certain squares on the board require the drawing of a Chance card which normally result in income being received from or paid to the bank. The “New Share Quotations” square results in the changing of share prices for some of the blocks of companies. This will result in players losing or gaining money on the shares that they own. It also requires players to put up one of their shares for auction thereby permitting players to trade in shares. The game can be ended in three ways, which should be decided before the game starts: - After a set time. - When the first player becomes bankrupt. - When all but one player has gone bankrupt. At the end of the game the money is counted and shares are valued at whatever is the then current rate. The player with the greatest assets is declared the winner.