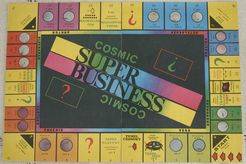 This game published in Poland in the years of economic crisis (last years of real socialism in central-eastern Europe) is clearly a somewhat modified clone of Monopoly. The players buy rights to colonize planets (streets) and build their bases (houses) and planetary colonies (hotels). The differences between this game and Monopoly are: - There are 9 not 10 areas in a row of the board thus there are 2 systems with 3 planets and 6 systems with 2 planets; - There is no auction if a player does not want to buy a planet; - There are no parallels to railway stations and power plants. Instead there are mining licenses (for magnetites, platinum, diamonds and uranium) and players may build mines on appropriate areas.There are also 3 transportation bases and players may build communication lines there.