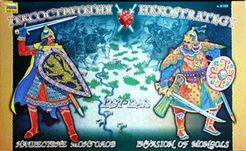 This "Age of Battles" series game covers introducing "Europeans against the Mongols!" As per their usual standards of quality, these are an excellent addition for those that wish to involve their many boxes of 'Army Men' into a gaming environment. This 'series' may well become the 'standard' for making MINIS gaming more popular in its appeal to newcomers. Invasion of Mongols is a classic step-by-step strategy game, i.e. players make moves in turn by moving their troops on a map and roll dice to learn the results of their actions. The game is dedicated to the events of the Mongol invasion of Rus' in 1237-40. One player commands the princes of Rus and the other leads the Mongol hordes. The game has 3 levels - financial-political, strategic, and tactical. It means that a player collects money, forms an army, leads them in marches, and commands them in a battle.