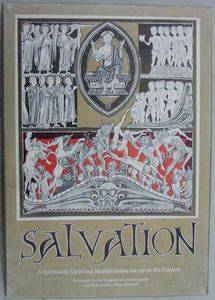 This is essentially a Monopoly clone with a tongue-in-cheek evangelistic theme. It's perhaps best described by the rules introduction: The game is suitable for all ages and beliefs, and is based on a synthesis of orthodox Christian beliefs and practices over the past two millennia, The board is divided into spaces representing services or works as well as Temptations, Acts of Divine Providence and various Benevolent or Malevolent eventualities administered by the Church. The aim is for each player or soul to gather sufficient Heavenly Credits to be assured of Salvation and to avoid Damnation. One difference from Monopoly is that a player can win immediately by landing on the Eternal Salvation space with adequate credit or be eliminated by landing on the Eternal Damnation space without enough. Rather than building houses and hotels on the green properties, one can employ priests, canons, bishops, archbishops and saints on a mission to the satanic intelligentsia. There is a fine for using "cash", "money" or similar terms instead of "heavenly credits". Production values are reasonable for what is probably a self-published game. The board is only on thin card, but the heavenly credits, mission cards and providence and temptation cards are similar to what one sees in Monopoly. The playing pieces are small metal figurines and there are cardboard discs for clerical staff rather than wooden or plastic houses.