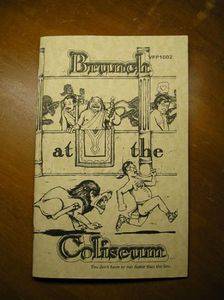 From the publisher's web site... "Play a gladiator, slave or even a lion as you do your best to win the favor of the Emperor in the Roman Coliseum. Combat isn't your only weapon, and remember, you don't have to run faster than the lion..." From back of game: Can you run faster than the lion? Chris throught he could... so did Dan. Who knows their fate? Only you can decide. Brunch at the Coliseum is a hilarious game of strategic and tactical survival for two or more players ages 12 and up. Violent themes.