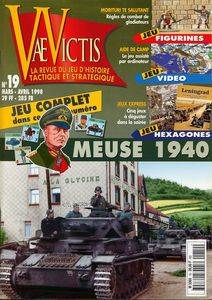 Vae Victis issue 19. This issue's game reprises the system used in Vae Victis issue 1 (Tunisia 1943), with some significant differences in the combat rules, to depict the German invasion across the Meuse in the spring of 1940. This game also includes a scenario and counters for "Cry Havoc!" from Standard Games. As with all Vae Victis games, the counters need to be cut out and mounted. The rules are entirely in French, although translations are available online.