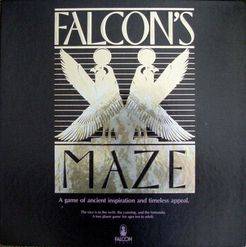 A Game of Race, Fortune, and Strategy The object is to be the first player to move two Scepters from your side of the board to your opponents. Scepters are clear plastic pawns. The board is 19x19 with a center square called the Falcon's Keep. The center square is where a scepter is placed when it is captured. Each player has 100 small gemstones to place on the board and which allow their scepter to land on that square. Gemstones in each set are random. Dice are in a clear plastic shaker. Players move by making a mandatory move of one of their Scepters in a straight line from one gemstone to another. It is possible to cross over empty spaces Players then roll the dice and may choose to move their Scepter or place additional gemstones. The Hop move can also be used to capture an opponent's Scepter. The Scepter moves in a hop move to adjacent gemstones to a max number rolled on one die. (The other die is then used to place a gemstone.) Placing gemstones depends upon the number rolled on the dice and opponent gemstones can block placement.