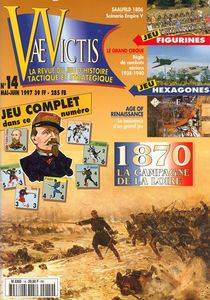 Vae Victis issue 14. This game covers some of the major campaigning in the Franco-Prussian War. The game features fog-of-war rules (hidden and dummy units), rules governing the destruction and repair of bridges and railroads (major themes of the campaign), and the crumbling and support of French national morale. As with all Vae Victis games, the counters need to be cut out and mounted. The rules are entirely in French, although translations are available online.