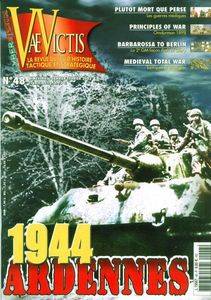 "Ardennes 1944", published in Vae Victis issue #48, covers the World War 2 Battle of the Bulge at the scale of two days per turn, 4.5 km per hex, and most counters represent infantry divisions or armored/other brigades or regiments. This is the fourth iteration of this particular wargame system, a favorite of Vae Victis's, previously used in issues 13 (Arnhem), 25 (Kharkov), and 39 (Kippour 1973). This game uses an "entirely reviewed and simplified" version of that system. As with all Vae Victis games, the counters need to be cut out and mounted. The rules are entirely in French, although translations are available online.