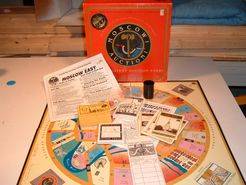 From the Playing Guide: "The goal is to reverse the Communist monopoly &amp; transfer properties to private ownership. Play of game continues until the Old Commie Bank goes broke &amp; all properties have been transferred to Private Ownership. The richest capitalist wins the game". Similar to monopoly, players roll dice to move an auctioneer token (airplane) to a property. The player who is the auctioneer rotates counterclockwise each turn. Depending on the property, it is either taken outright by the auctioneer, sold to the highest bidder in a free auction, or sold to the bidder whose bid is closest to a hidden die roll. Landing on an owned property requires paying the owner a fee based on a die roll. Multiple properties of a given color multiply the fee. The player to the right of the auctioneer is the KGB (red car) and attempts to get to the property that the auctioneer is at (using die roll) to steal any proceeds or fees. Players can also obtain escape cards to foil the KGB, or black market cards that provide special benefits.