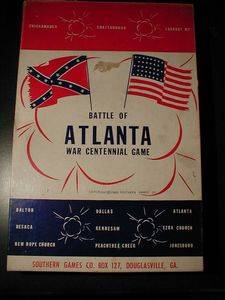 Interesting game in the Avalon Hill mode published in 1960. Mounted mapboard and cardboard counters. As described in the rules: Battle of Atlanta War Centennial Game is a war game featuring the Atlanta Campaign of 1864, and also includes other war games centered around the East Tennessee and Northern Georgia battles of 1863-1864. These are games that both teenage and older players can enjoy. Having military experience is no advantage-- the methods of play are definite, decisive and easily mastered." The game board, while rudimentary, includes rivers, mountains, high ridges, railroads, roads, streams, towns and cities. Each side has a number of counters representing infantry, artillery, cavalry, locomotives and headquarters, each with varying strength and movement capabilities. The pieces are identified by number only (i.e., an infantry piece has a #4 on its face, and an artillery piece has a #2). Movement is affected by terrain, as is battle strength. The Union army wins the main game by retaining control of Chattanooga and capturing Atlanta. The Confederates win by holding Atlanta. The game is interesting in part because of its publication date. There wasn't much competition for Avalon Hill in the early 60s, but fans of Avalon Hill's early games will immediately recognize elements of this one.