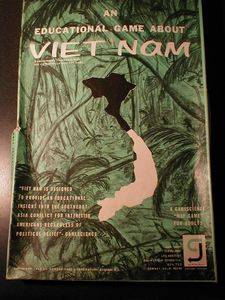 Published by Gamescience Corporation in 1965, this game claims to be "a remarkably realistic recreation of the situation" in Vietnam. One player or team controls the Vietcong and the other controls the Government forces. You win either a diplomatic victory or a military victory. Viet Nam includes area movement, insurgency, a government stability index, air strikes and bombing tables, irregular units and regular units. Players secretly position insurgency pawns, write out military orders, move according to those orders, and conduct battles. World opinion, terror, ambush, and psychological warfare are all incorporated into the game in a four page rulebook. The game also includes situation cards to add realism. This was an excellent attempt at an early simulation of the war.