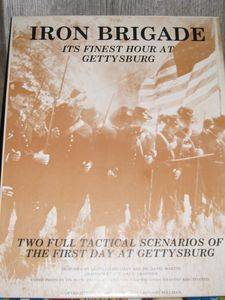 Sub-title:’ It’s Finest Hour at Gettysburg', and is about this Unit's involvement during the 1st Day of the epic 3-Day Battles that followed. The IRON Brigade at this point, consisted of the following Units: the 19th Indiana Regiment, the 24th Michigan Regiment, plus the 2nd, &amp; 7th Wisconsin Regiments commanded by Brig.Gen. -Solomon Meredith, with elements of the 142nd &amp; 151st Pennsylvania Regiments. The 6th Wisconsin Regiment had been a part of the original Brigade but had been 'absorbed' due to previous losses into the other units while the 24th Michigan was added later on. They were also known as the 'Black Hat' Brigade due to their distinctive head apparel and were well respected among their foes &amp; peers. There is an excellent photo-depiction of a 're-enactment' group in full uniform on the front cover of the game box complete with their 'ostrich plumed' hats! The components consist of the following: a thin 'book-case' style cardboard box; a RULES Booklet; a 7-COLOR 17" by 22" paper Map sheet; 2-Sets of cardboard counters (200 total); &amp; Players must provide their OWN (2)~6-sided DICE prior to playing. This is considered to be of Moderate Complexity according to its authors. The game scale is given as: 30-yards across per HEX; Elevation intervals of 10~20-feet; each Strength Point=15-Men; and 1-Turn=6-Minutes. On the Map sheet are: the Battle Area of a portion of McPherson's Ridge about 1-Mile West of Gettysburg; the Sequence of Play; a Game Turn Track with the 2-Scenarios displayed (a separate Morning~7-Turns &amp; an Afternoon~10-Turns); &amp; a Terrain Key. There are (4)-shades of BROWN to depict varying Elevations as well as Light TAN for the lowest, BLUE for Stream, &amp; GREEN for Woods, while Fences &amp; Contour lines are in BROWN. The Game counters are printed Front &amp; Back with Light BLUE with BLACK print for the Union, &amp; Light GRAY with RED &amp; BLACK print for the Confederates (RED-Morning Scenario, BLACK-Afternoon), and WHITE with RED &amp; BLACK print for informational, replacement Officers, &amp; Strength Point markers. The counters also have various 'Hat' &amp; 'Cap' silhouettes on them to represent the Unit types while some of the informational ones have a soldier(s) silhouette(s) on them for dispositions such as 'Charge', 'Melee', 'Volley Fire', etc. The RULES detail the Historical background by Dr. David G. Martin, with a decent listing of reference materials. The last page contains the COMMAND Point Chart, MOVEMENT Point Chart, MORALE Table- (with Morale Modifiers detailed) while the REVERSE side of the page has the MELEE Combat Results Table, MELEE Combat Modifiers, &amp; SPONTANEOUS Rally Chart. For those of you familiar with the previous works of this duo, this game follows along those same lines. The Sequence of Play is as follows: [1]~1st Player Turn-A.PREP.COMMAND Phase-1) Spontaneous Rally, 2) Leader Replacement, 3) Check Command Radius, 4) Rally Ordered B.EXECUTION Phase. -1) Issue Orders, 2) Conduct Movement C.FIRE COMBAT Phase-1) Defensive Fire, 2) Offensive Fire D.MELEE Phase-1) Charge Movement, 2) Declare Attacks, 3) Withdraw or Stand, 4) Melee Combat Resolved. [2]~2nd Player repeats Phases A-D. [3]~Victory Point Phase [4]~Game Turn Ends.