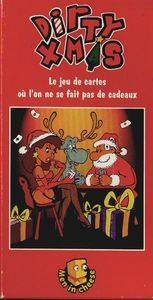 It is Christmas Eve and the eve of Santa Claus's retirement. Players are competing to succeed him by delivering the most and best presents. The game is played over twelve rounds, representing the twelve chimes of midnight. On a round a player must perform any combination of three actions from a total of four possibles or pass, discard and refill. Essentially the actions are place scoring cards (deliver presents) or interfere with your opponents' deliveries. Event cards turn up which affect everyone immediately. The winner is the player who after the twelfth chime has the highest total of present points in his display, with rules for tie-breaks. A variant is suggested giving a variable game length by shuffling the "chime cards" into the deck. By the way, despite the curious title, the game is perfectly suitable for family play! Home Page : http://www.monpetitcoin.com/createurs/xmas/