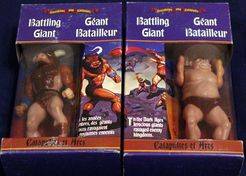 The Battling Giants expansion adds a Cyclops and Minotaur to Crossbows and Catapults. The expansions were available both separately and as a two part gift set. The Cyclops is a "catapult" based carom launcher that holds a carom in its "hands" and is spring loaded to launch the carom when a button is pressed on its back. The Minotaur is similar to the cyclops except that it loads its carom in its horns. May be used in a standalone game or added to C&amp;C basic set as an expansion. CONTENTS: (for the combined set) 1 Minotaur 1 Cyclops 4 red caroms 4 blue caroms 8 barbarians 8 vikings label sheet