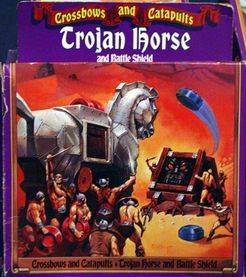 The Trojan Horse and Battle Shield expansions add a Trojan Horse Catapult and Battle Shield Crossbow to Crossbows and Catapults. The expansions were available both separately and as a two part gift set. The Trojan horse features a "tail" catapult launcher, and a compartment in the torso of the horse which houses "warriors". When the horse is hit at the front base of the unit, the horse flies open, ejecting its occupants to the ground. The Battle Shield is a wheel mounted combat platform that mounts a semi-automatic crossbow in its undercarriage. This is probably the coolest weapon in the game. Striking the shield (with a catapult) causes the battle shield to explosively destruct by flinging it's shield down and pulling the frame back, ejecting any riders that may be on the shield platform. May be used in a standalone game or added to C&amp;C basic set as an expansion. CONTENTS: (for the combined set) 1 Trojan Horse 1 Battle Shield 8 Vikings 8 Barbarians 4 red caroms 4 blue caroms label sheet