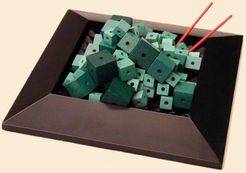 The cubes are shaken out arbitrarily onto the board, making a pyramid. Any cubes that may be lying on their own on the edge of the board should be placed on the pyramid as well. The wobblier and higher the pyramid, the better. The start player takes the two sticks and we're off! The aim is to try and get as many cubes off the pile as possible using the sticks (either one or both of them may be used). But be careful! None of the other cubes must move or your turn is over and the next player can try his luck. And one thing's for sure--all of your opponents are going to be watching you with eyes like saucers. Whoever has the most points at the end of the game wins.