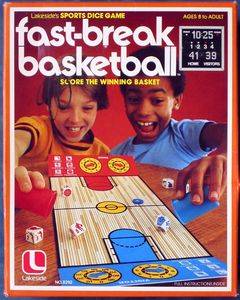 Fast-Break Basketball is a dice-rolling game that emulates a three-a-side basketball match Each player uses three dice to represent their players: forward, center, and guard. Each die has a custom face with its special symbol. The game's main mechanic is that an attacker (the one in possession of the ball) succeeds in his or her action by rolling a number higher than or equal to the defender's; special symbols tend to trump numbers. The dice are placed on the board such that the centers face off against each other, while the forwards go against the guards. The game starts with a roll-off between the centers. The winner gains the ball (represented by the offensive marker), which grants a bonus to the attacker's dice rolls. Only forwards and centers can take shots to score points; the guards steal the ball. All positions can pass among each other. The first player to reach an agreed-on score wins and ends the game.