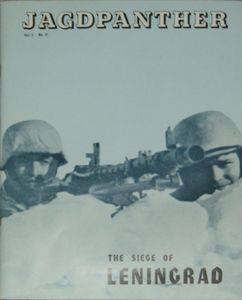 This game depicts the efforts of Army Group North from 1941 to 1944. The area encompassed by the Map sheet covers the Baltic coast up to Leningrad &amp; past-including part of Lake Ladoga, North to past Tikhvin, over to past Demyansk, &amp; South to past Ostrov &amp; Tartu. The RULES have Special provisions for: Railroads; Engineers (Soviets ONLY); Weather effects (WINTER:Frozen Lakes/Rivers hexes); Airpower (German Airstrikes ONLY); Artillery (Ranged-Soviets ONLY); Supply Units (Germans ONLY) &amp; Supplying Leningrad. There are 5 scenarios: Breakthrough on the Luga Front - 8 Turns 1 - July~17 Sept.,1941 Battle in Northern Russia - 9 Turns - 18 Sept.~5 Dec.,1941 The Seige of Demyansk - 10 Turns - 12 Jan.~22 April,1942 The 2nd Battle of Lake Ladoga - 8 Turns - 28 Nov.,1942~26 Feb., 1943 The Destruction of Army Group North - 12 Turns - 29 Nov.,1943~27 March, 1944 Sequence of play is as follows: Germans begin first, 1.Reinforcement Phase; 2.Supply Determination Phase; 3.Movement Phase; 4.Combat Supply Determination Phase; 5.Combat Phase; 6.Mechanized Movement Phase; followed by the Soviet Player performing these same phases. NOTE: in some of the later scenarios, the Germans "skip" their entire FIRST turn, thereby allowing the Soviets to start the game. There are many details on the map including the German Demyansk Pocket. Leningrad forts are represented. Supply level is recorded as units in the city have to trace supply to it. The game scale given is: 10.5 Km across a hex, Regiment/Division/Corps level but NO Historical designations, for Units, and each turn equals 10 Days. Published as a magazine game in JagdPanther #13 which has been rereleased in PDF format by Amarillo Design Bureau.