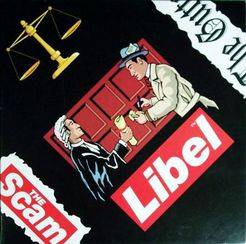 "The game of Libel was devised by William Roache after he sued the SUN newspaper for printing a defamatory article about his portrayal of Ken Barlow in a well known TV serial." "Once his Libel case had ended, William assembled the elements of both his case and others into a game for all the family that comprised the four components, entertainment, competition, 'needle' between players, and an educational step-ladder for those who have never taken part in a civil Court action." "Libel guides the players through the quicksand of assembling a full team of legal advisers in order to proceed to a full trial. Players pay their fees in order to employ them and use their skill to decide when to buy. Buy too soon and you could find yourself losing team members to another player, allowing them to proceed to trial and win." "The pitfalls and penalties imposed by the Courts and extremes an opposing BARRISTER can play will frustrate you during CROSS-EXAMINATION."