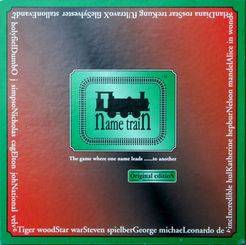 From the Designer/Publisher: Like most games the main objective is to try and be the first to finish, you do this by traveling around the game board (using names as your fuel), collecting one passenger from each of the following six categories, then taking them to the main central station to complete the Nametrain™! Music.. Any group or Musician as long as they are known as the recording artist Television.. Any TV program, but no using films shown on TV. Film.. Any film whether it has been shown on the big screen, video or T.V. Sport.. Any sports person, male or female. Actor/Actress.. Any actor or actress from TV, stage or film Well Known People.. A category for those that don't fall into any of the other categories. Playing the game To play Nametrain™ is very simple, somebody says a name from one of the six categories (listed above) and the last letter of that name is then used as the starting letter of the next. Each player then takes it in turn to roll the number dice and move their train along the allotted spaces, they must then give an answer from the category they land on using the last letter from the previous players answer as the starting letter of their answer...and so on. For example The game is in full flow and it's your turn, the player to your right has left you on an 'E' by saying Bruce leE (they were on the actor/actress square). You roll the dice, you move four spaces and land on the music square. You only have 60 seconds to say the name of a group or singer whose name begins with an 'E'. Who do you say...the sands of time are slipping away...if you don't say a name soon you will lose one of your passengers, there's only a few seconds left...what about Elvis presleY. It gets you out of trouble and leaves the next player on a 'Y', they could now be the one in trouble with you taking one of their passengers.