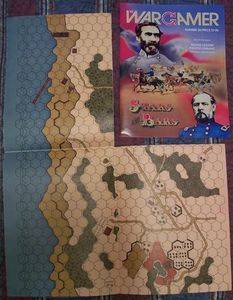 This is a supplement from The Wargamer #30, for Squad Leader and provides RULES, 3-Scenarios, and (3)-Mapsheets for use with other components NOT included but available with YOUR Squad Leader games. The Mapsheets are the same size (8-1/2" by 11") as the standard Squad Leader boards, are NOT mounted and have FULL colors(in a Pacific Island Beachhead motif) printed on them. They also have a designation (P-16 Tarawa) printed on one of them maybe for some future Scenario. The RULES detail their introduction, background information on the Japanese, a Map of where the entire Scenarios(20 of them)are taking place all over the Pacific arena, and the 3-Scenarios depicted here. These are: S.P-4-To the Death:Yae Take-Okinawa, April 15, 1945; S.P-6-Airborne Samurai:Buraen, Leyte Island, Philippines, December 6, 1944; S.P-9-Bloody Betio:Betio Island, Tarawa Atoll, November 20, 1943. They are presented in familiar Squad Leader format with any Special Rules used included in the notes section. There are many Special Rules included of which these are some of them: Starshells; Air Support-Napalm; Caves; Special Invasion Rules; Tunnels; Dogs; Special Infiltration Rules; Weather-Climate; Booby Traps; Dated Japanese Play(for after 1943 Scenarios)&amp; Misc. There are also some game counters that Players will have to produce themselves, prior to playing these. A note is made stating that in the future, MORE Scenarios and possibly, related game Counters will be provided in later editions of the Wargamer magazine. Bill Wilder originally self published Blood &amp; Sand as an independent publication in the following three parts: Part I: Against the Rising Sun (1983). Contained the core rules, seven scenarios (P-1 to P-7), sheet with un-mounted color overlay and counters. Part II: Island Ordeal (1983). Contained six scenarios (P-8 to P-13) and two color, un-mounted geo-boards (P-16 [reproduced in the Wargamer with a few errors] and P-17. Part III: Do or Die! (n.d.). Contains seven scenarios (P-14 to P-20) and sheet of un-mounted counters and overlay P-B.