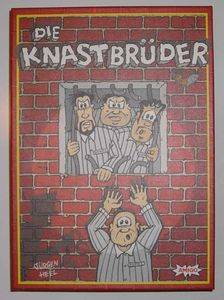 In `Inmate' players attempt to release their friend from prison first. Each player is secretly assigned one of the inmates to break out of jail. When all ten bars are removed from an inmate's window the inmate escapes. Players roll dice to determine what they are allowed to do. When a policeman is rolled the player can do nothing. On a roll of one to five the player chooses one cell from which that many bars will be removed. One bar leaves the game and the rest are distributed to cell windows according to the player's choice.