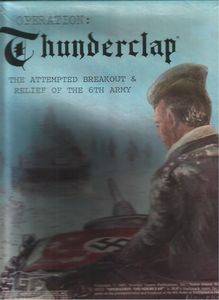 Sub-title:"The Attempted Breakout &amp; Relief of the 6th Army" Based on the Stalingrad Campaign and the German's abortive battles to Blitz through the Soviet's in order to link up with their surrounded 6th Army. The components consist of the following: an illustrated(by Bill Keith)Cardboard Bookcase style Box; a 17-inches by 22-inches 6-Color Mapsheet; a Full-size Rules Booklet; a Cardboard Countersheet(238 total); an Errata Sheet; AND a 6-sided DIE. The Mapsheet is overall Light BLUE, with BLUE water features, GREEN Woods, GRAY Higher Ground, RED with BLACK lines Hills, RED-dotted Start-line, RED-slanted-line Stalingrad Pocket Hexes; RED-enclosed-Star Soviet Supply Hexes designations; BLACK Roads, Trails, Town, City, Airfield, German Cross Supply Hexes designations, Names, lettering, &amp; Mapsheet edges. The Rules Booklet has 2 Sections with the 2nd part providing the Set-up for Play of up to 3 Scenarios, the Rules for Solitaire Play, and plenty of Charts &amp; Tables which SHOULD be copied or cut apart for use during the game. There is even a Reduced copy of the Game map if players should feel the need for using one.The cardboard Game Counters are Dark PINK with BLACK &amp; WHITE print for the Soviets, and Light GRAY, GRAY, Light PURPLE, and BLACK with WHITE &amp; BLACK print for the Germans using mostly NATO style symbols &amp; a few silhouettes for Type designations with some Informational markers also provided. The Errata sheet has some misprinted Counters information, Tiger Battalions Breakdown &amp; Jammed Rules, Set-up clarifications, and the Terrain Effects on Combat table. The 3 Scenarios are: (1)Operation:WINTER TEMPEST-an Historical depiction with up to 6 Variants; (2)Manstein's WISH:the Early Attack; &amp; (3)The Maximum Effort. The SCALE of the Game is given as (4)-Miles across for each HEX, each TURN equals (1)-Day, and Units are Battalion to Divisional level with Headquarters for Division to Army level. The Sequence of Play is as follows: 1.Mutual Supply Determination Phase plus possible Mud Conditions die-roll; 2.German AIR Phase; 3.German Movement; 4.German Combat; 5.German 2nd Movement; 6.German Special(Mech) Combat; 7.Soviet Artillery Barrage Phase; 8.Soviet Movement; 9.Soviet Combat; 10.Soviet Special(Mech) Combat; 11.Mutual Disruption Removal Phase; 12.New Turn-Move the Marker 1 box to begin again. NOTE:There is NO Soviet 2nd Movement-ONLY the German MECH-types are allowed this. Reinforcements will enter PLAY during their respective Player's initial(1st) Movement Phase. There are SPECIAL Rules for: Headquarters-Tracing Supply &amp; providing Artillery Support(2-Hex Range); Supply CONVOY(Germans ONLY); Troop QUALITY; AIR Points-Ground Support(Both) or Stalingrad Supply(Germans ONLY); Weather; Combined ARMS attacks; Engineer, Machine Gun, &amp; Anti-Tank units; Combat shrifts; Operation:THUNDERCLAP-the Breakout; &amp; the Surrounded German 6th ARMY. The SOLITAIRE game has provisions for a Player to see how well they perform as EITHER side during a game. GERMANS:There are Objectives set up for the NON-Player side centered around the 3 PANZER Divisions involved and when some are accomplished or moved to, then NEW ones are determined that they'll have to achieve and this process continues throughout the game. The entrapped 6th ARMY has it's OWN Breakout Decision Table as well. SOVIETS:The various Soviet CORPS/Armies have differing Objectives according to their COMPOSITION and the GERMAN's Units near them which produces a Modifier which is then applied to the SOVIET die-roll on the Objective Table. This can result in the subject CORPS/ARMY adopting an Elastic-Defense, Fighting-Defense, Hold-at-ALL-Costs, Advance-to-Contact, Limited-Assault, or All-out-Assault which are further explained in the RULES Booklet in greater detail. THIS is one of the more professionally produced Games by Perry Moore, et al, and takes an unusual tact in that the Units have Movement Designations using LETTERs instead of NUMBERs for them. These are H-horse drawn~[6]-Movement Points, L-Leg powered(Infantry)~[4]-M.P.s, T-Track equipped~[9]-M.P.s, &amp; W-Wheel based~[10]-M.P.s. Units will also have a Troop QUALITY letter with E=Elite, D=Depleted and NO letter=LINE. This can affect COMBAT &amp; RETREATS, which result in Disruption for Depleted Units although Elite &amp; Line Units are not so affected. The SOLITAIRE Rules have been extensively detailed to allow Players to experience the game system and formulate some strategem which they can apply in some future game against a worthy opponent.