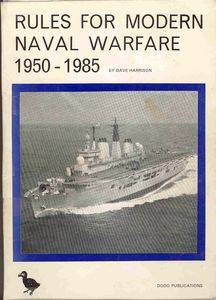 These rules have been designed to simulate a modern naval action involving surface ships, submarines and aircraft of todays (1980s) navies, using the recently introduced range of 1:3000 scale warships. The rules were originally designed for a large scale naval campaign in which large numbers of ship8 would be engaged in combat. To achieve this it was necessary to generalize certain areas for the sake of playability this, whilst not giving absolute realism (which can never be achieved in a game), resulted in a very fast and enjoyable game. The rules are not designed for a single ship v. single ship combat, as it was considered “highly unlikely” that in any future Warpac/NATO conflict a solitary NATO ship would come across and fight a solitary WarPac warship. The more likely course of events 1s for the WarPac (Soviet) navies to sail (by devious routes) to prearranged rendezvous points several days before hostilities are due to commence. From there the “Task Forces” prime function would be to disrupt the American reinforcement of Europe; to intercept and destroy the Vital oil cargoes in the Arabian Gulf, off the African coast and in the Indian Ocean; to prevent the transfer of allied warships into and out of the Mediterranean, and to harass the US Pacific Fleet (with the idea of drawing forces from the Atlantic to keep the Pacific Fleet “in being” to counter any threat in the Pacific) A further option open to the Soviets would be to use the obsolete Kynda class cruisers to bombard US coastal cities with their long range missiles, compelling the US to keep back warships to protect their own coasts. In any of the above scenarios the Soviets would use their ships ‘en masse’ to achieve their objectives. It was with those actions in mind that these rules were written, to enable the Wargamer to fight through the Atlantic convoys, to endeavor to keep the oil flowing or to fight for the glory of the revolution and crush the wicked capitalists (even if it costs you your life comrade). It is hoped that the users of these rules do know something of modern warships and win use this set as the basis of a campaign involving a number of wargamers as it is only when there are large numbers of ships involved that the maximum enjoyment can be obtained. Scale 1 move = 2.5 minutes 1 inch = 1km 2mm/turn = 1knot