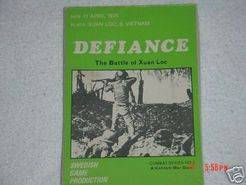 Defiance - The Battle of Xuan Loc (11 April 1975) - Combat Series No. 2 - A Vietnam War Game (designer Perry Moore) by Swedish Game Production. Defiance - The Battle of Xuan Loc includes a three-color map, 130 die cut counters, typeset rules and charts, and ziplock bags for counter storage. The game achieves accurate simulation by means of special rules like: Close Assault, Cluster Bombs, Off-Board Artillery, ARVN desertion, CRT shifts for Leader and Armor units, Optional 'what if' Order of Battle, Air Support, Artillery Barrages. Also included are a Historical Background and Designer's Notes for full playing enjoyment of this unusual battle of the Vietnam War. During the closing days of the 1975 North Vietnamese Offensive, four NVA divisions were pitted against a small ARVN force, dug-in astride the rugged hills near Xuan Loc - a town of 30,000 people located along one of the key roads into the capital, Saigon. Advancing in strength down the coastal highway were the NVA 5th, 6th, 7th and 341st Divisions, massed with artillery and T-54 tanks. Defiantly blocking their way were the ARVN 18th Divisions and 3rd Tank Brigade. The battle which followed was unique in many respects for the Vietnam War, involving units of divisional size, devastatingly effective ARVN airpower and sophisticated US-made CBU-55 Cluster Bombs. For nearly 2 weeks, the ARVN held Xuan Loc and counterattacked against impossible odds. It was an engagement describable only as 'heroic and gallant' on the part of the South Vietnamese defenders, being one of the few places where the ARVN, though outnumbered, stood and fought with a tenacity which stunned their opponents. So epic was the stand of the ARVN that the entire South Vietnamese Army, previously routed, grew confident again. News reporters were flown in from around the world to witness the battlefield strewn with NVA corpeses, repelled in assault after assault with heavy losses. Game Rating (Based on independent test group results): Complexity - Moderate, Balance - 50% - 50%, Realism - 7, Excitement - 9, Overall - 6.5, Play Time - 3-4 hours. The end of the Vietnam War - April 1975. The US have pulled out and the South's armies are crumbling before the North's advance. The components are functional with a 17" by 12" map and about 100 counters. The map is in 4 colours and shows the area around Xuan Loc including Bien Hoa Airbase. The counters are light green for ARVN and dark green for NVA. each counter is a Regiment or Brigade. The rules are detailed and cover most aspects of modern war without getting too complicated. Special rules include Leaders, Headquarters, Fortifications, ARVN Desertions, Cluster Bombs etc. From the Designer's Notes: the game "is truly a slugfest. Both sides have a road to victory."