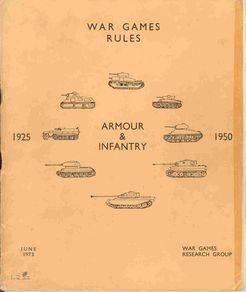 Miniature rules Although our title gives precedence to armored warfare, this set of rules is equally suitable for combat between infantry companies, and is the first to make realistic provision for all the fringe areas such as communication, engineering, air attack, obstacle clearance, fighting in fortifications, off-table fire, air observation, target location, weather, all types of terrain, and the reaction of troops to combat stress. The rules are designed to be equally suitable for the old favorite 1/72 scale models and figures and the newer scales down to 1/300 which are revolutionizing modern period war gaming. The period covered by this set has been selected to include the rise of the fast tank and the independent armored formation, the Spanish, Abyssinian, Sino-Japanese, Russo-Japanese and Russo-Finnish Wars, all the campaigns of the second world war from the invasion of Poland to the Russian sweep through Japanese Manchuria, and the Korean War. A companion set covers the period from 1950 to 1975, which sees the introduction of anti-tank guided missiles, helicopters, range finders, and efficient A.P.D.S., H.E.S.H. and H.E.A.T. ammunition for tank guns. A third set covers the whole period from 1925 to 1975, but from the point of view of infantry platoon level combat, and is suitable for figures from 1/72 to 1/35 scale. This particular period is a very complicated one, with old weapons being replaced by new in an ever proliferating series. As usual, we include quick reference sheets to avoid leafing through the complete text in a frantic attempt to find the bit you want. As it is impossible to include details of all weapons on a single sheet, it has instead those that are reasonably universal, together with blank spaces into which you can copy from the main text those others you want to use. After all, not many wargamers habitually use both Centurions and 1920 vintage Vickers Mediums at the same time, but please don’t take this as a challenge! We presume throughout that a player will have a general knowledge of the weapons he elects to use, and so include performance details only. One change from our previous sets of rules is the use of alternate instead of simultaneous movement. This is partly due to the reduced validity of a strict time scale in tank versus tank engagements where an exchange of fire is normally completed and one tank disabled in 10 to 15 seconds at close range. It also speeds up play, giving a truer flavor of fast moving tank action, and enables you to tell at a glance which party in an exchange shoots first. Other innovations include a one to one figure scale and an arithmetical instead of a logarithmic ground scale. A model or figure therefore always represents a single tank or man, not a platoon or section, and a millimeter measured on the table always represents one meter. Metric measures are used because all campaigns were fought with metric maps, even the one inch ordnance survey has a 1,000 metro grid. Finally, this is the first set of rules we have produced where we can claim relevant personal experience, one of us having served in the Desert and in Western Europe during the Second World War, and the other having been in turn a field engineer, a tank gunner with experience of Churchill and Sherman and later tanks, and an infantryman. Includes the rule book and a Quick Reference Sheet