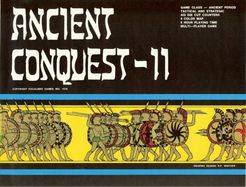 Multi-player wargame based on ancient warfare in the eastern Mediterranean, featuring the Peloponnese War, Greco-Persian wars, the rise of Alexander the Great of Macedonia, to just before the beginnings of the Roman era. The innovative victory system requires each player to assume the control of multiple nations listed on their player card (Group One, Two, Three and Four). They win by achieving the most historical objective points listed on their card. Each player has different objectives listed by the peoples/nations of their group. Each turn begins with 5-minutes of negotiation and open discussion/diplomacy. Components include: (1) 8-page rulebook (1) Full-color, 22x34" map (2) Counter sheets (400) Counters (4) Player Objective Cards (order of appearance/setup on the back) (1) 2-sided Charts/CRT card