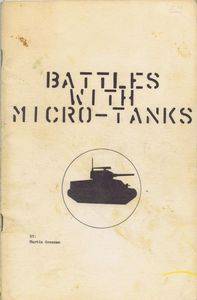 Battles with Micro-Tanks Miniature rules These rules are designed primarily to permit you to recreate WWII engagements, both small and large scale, using micro—scale (1:300) units. The variety of combat situations which occurred during WWII was almost endless. Battles were fought in deserts and mountains, in good weather and bad, with a wide selection of unit types and equipment, and this era therefore offers the wargamer an opportunity to create practically any type of combat situation he desires. Those rules will allow the wargamer to simulate both small and large scale actions, which retain a high degree of realism, yet are very playable. They permit the players to easily control the large quantity of units sometimes used when gaming in this scale. The basic ground scale is 1 inch equals 50 yards, and the basic time scale is 1 turn equals 120 seconds. At this particular ground scale, each unit would represent from 4 to 5 actual units, and you may, of course, play this way. However, it was found that using a 1 for 1 vehicle/unit system works out quite well also. For infantry, one (1) 1/2 inch marker, or 1/2 inch base, with 2 or 3 micro—scale figures mounted on it, represents a 6 to 10 men squad. When an infantry squad is referred to in these rules, this is what is meant. The equipment lists in the tables describe most of the common pieces of equipment used during WWII. If you wish to use others, it should be a relatively easy procedure to add them, adjusting their values relative to the other equipment. When playing a micro-armour wargame, it usually works best when a disinterested third party is used to settle all judgment disputes. This will help the game to move quickly, with a minimum of disruption. Another recommendation which can enhance realism, and can also make the game easier to control, is to maintain some form of unit integrity. There are many references available which can be used to determine the actual composition of the units in question. As a rule of thumb, you can use the following: 3 to 5 units per platoon 3 to 5 platoons per company 3 to 5 companies par battalion. Other specialized types of units may be attached for a given scenario. As a minimum, it is required that you maintain at least company integrity. The farthest any unit can be away from any other unit in the company is 2 inches.