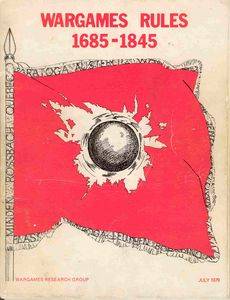 Wargame Rules 1685-1845 (for Miniatures) The biggest innovation is the introduction of an alternate play system developed from that used in our very successful World War Two and Modern Armour rules instead of the more recently fashionable simultaneous movement in accordance with detailed written orders. Its main advantages are that it saves the time spent order writing, eliminates disputes of the “If you do that, I do this” type, simplifies interactions between the two sides, places less strain on players honesty, and largely makes umpires redundant once players know the rules thoroughly. The special sequence of play we have devised eliminates the inherent disadvantages of more primitive alternate move as opposed to alternate play systems. The more innovatory a set of rules is, the more unfamiliar it is going to be to the players. Please dont write in blaming us for departing from accepted methods; after all it WAS us that invented them. It is possible that in spite of our testing anomalies will start to rear their ugly heads as more and trickier players become involved. If so, they will be cleared up with one of our usual free amendment sheets. We are in any case happy to answer rule queries enclosing a stamped addressed envelope or international reply coupon. Our test games have made us confident that the new system is a winner and will probably become the war-gaming standard. Let us know how you get on. By adopting alternate play and an apparently simple “bang you’re dead” combat system, we have been able to introduce a little more complexity elsewhere in the rules without overburdening the poor players brain too much. This includes a new method of choosing terrain based on actual battlefields, a command structure incorporating brigades, divisions and if you like corps, consideration of the personalities of individual generals, and a simple but very effective method of discouraging telepathic heroism and ensuring realistic conduct by units, including provision for differing national characteristics. The net effect is to give the player the sort of variety in his games previously provided only by ancient wargaming. We take the RESEARCH part of our name seriously, and it is because of this that you will find many of the basic assumptions in our former set have been changed. In particular, study of contemporary drill books in the Ministry of Defense library has convinced us that the movement rates specified by us (and universally copied by our competitors) were wildly out. This led to changes in ground and time scale that were ultimately of great benefit to the rules. We must also mention Brigadier B.P. Hughes whose two recent books made an excellent starting point for reconsidering the whole question of weapon lethality under combat conditions. The extension of our period back to 1685 enables us to take in all Marlborough’s battles, starting with Sedgemoor, the Highland rebellions, and the early battles of Frederick the Great, in addition to the Seven Years War, War of American Independence, campaigns in India, French Revolutionary and Napoleonic Wars covered in the previous set. Although at first chary of such an extension, our research discovered no good technical, tactical or organizational reason against it. However, had we gone earlier than 1685 we would have had to contend with half armoured infantry and three quarter armoured cavalry, while to go later than 1845 sees the introduction of the Colt revolver by Texas Rangers in the Mexican War, of the Dreyse breech loading rifle by Prussia against Denmark and of the expanding bullet muzzle loading rifle, together with the replacement of rigid lines by thick skirmish formations, at first unofficial but later recognized by authority. As for the beginner, do not be overawed by the size of this rule book and its apparent complexity. Start by reading right through it, but remember that all the basics are incorporated in the single thick reminder sheet enclosed, so that you will only need to turn to the main rules when you need fuller explanation. You will find that after a while you can increasingly rely on your memory instead of even the reminder sheet. Try and keep it simple for your first few games, bringing in more troops and more ambitious tactics when you get the feel. The rules are designed so that actual historical tactics will be the ones that work best.