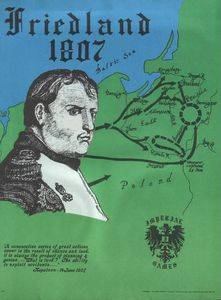 The Game consists of the following components: a Ziploc "Baggie" for storage; a paper Coversheet with cardboard backing; a thick paper covered RULES Booklet; 2-thick paper Charts; a heavy paper 3-Color Mapsheet; 2-Sets of die-cut Cardboard Counters; &amp; Players must provide their OWN (2)-[6]-sided DICE. The Game Mapsheet is overall WHITE with BLUE water features, GREEN forests, and BROWN Lettering/Numbering, Village, Bridge, Road, Slope, Ravine Hexside, and Ford(crossing). The Game Counters are Dark BLUE with WHITE print for the FRENCH, and Dark GREEN with WHITE print for the RUSSIANS. The Game Charts are Light GREEN with BLACK print FRONT and BACK with one of them having the Terrain Effects/Combat Results while the other has the TURN Record Track/Initial-Set-Up/Unit-Types/Unit-Designations-&amp;-Sizes; and the sturdy RULES Booklet Cover with overall Dark BLUE and WHITE/BLACK print at about (4)-FULL Page sheets within. The RULES are paper sheets folded in half, per page, with small print on both sides while an extensive Introduction on the Battle and detailed Orders of Battle are also provided. There are some Game Charts/Tables in the RULES Booklet such as the Bridge Bombardment Table, Morale Check Table, and Range Effects Chart. The Game Scale is 400-yards across a HEX, EACH Turn represents 30-Minutes, and Units are Regiments/Brigades/Divisions with Headquarters for FRENCH Army Command(Napoleon), plus the (4)Corps Commanders under him and RUSSIAN Army Command(Benningsen), plus the (3)Corps Commanders under him. The Game-Turn Sequence is as follows:-1.French Movement Phase &amp; Reinforcement Entry; 2.French Combat Phase; 3.Russian Movement Phase &amp; Reserve Forces Release die-rolls; 4.Russian Combat Phase; 5.Turn Record Track marker advance. The Game begins at 8-A.M. and lasts until 8-P.M. at the latest or when one side or the other is destroyed or resigns. There are Special Rules for the Commanders &amp; their Control(Command Range) over their Units, the Russian Reserves, Guard Units(BONUS 1-HEX additional RANGE) on both sides, Artillery RANGE(up to 5 hexes &amp; DOUBLED Strength at 1-HEX distance), Bridges(can be Damaged/Unusable and Repaired later OR Destroyed), Demoralization-in this game BOTH sides can suffer from THIS, and Breakdown of Larger Units into several smaller ones. The Combat Results Table uses (2)-DICE and even includes a ROUT result(Units affected are Eliminated and Victorious Units can Advance their FULL movement) while ROUTED Units COUNT for Demoralization but NOT Victory Points determination, a SKIRMISH result which enables the DEFENDER to counter-attack at 1-1 OR RETREAT-1 &amp; Attacker Advance-1 as well as others standard in a game such as this. The RAVINE hexsides incur a HUGE movement penalty in order to cross them PLUS Zones of Control do NOT extend across them. Overall, a very nice depiction of this Napoleonic Battle resulting from the pursuit of the Russians after the debacle at Eylau in that earlier encounter, and preventing them from linking up in full force, with the Prussians.