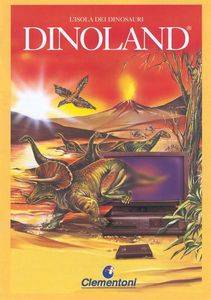 After the success of "Atmosfear", Clementoni commissioned this game asking for the presence of a VHS tape and published it just in time for the exit of "Jurassic Park" in Italian cinemas. Each player leads an expedition on an island that is going to be destroyed soon by a volcanic explosion, to save dinosaurs with their eggs, fossils and cubs. Everything happening is determined by the videotape: Professor Darmin is at the screen of your tv as if he was at his spaceship window. The succession of events is known, after a few games: but the trick is that what the professor describes happens in the same area where the spaceship pawn is at the moment, so the strategy is to get near to it (or to move it in the most advantageous spot). The game sold about 32.000 copies in the first year. Authors are Andrea Angiolino, Fabrizio Casa, Luca Giuliano, Massimo Casa, Stefano Giusti and Marco Bardella of the C.UnS.A., or Cooperativa Un Sacco Alternativa: a Roman group of designers. When the game went into print, the publisher cut the names to three since he thought they were too many and erased the name of the team because a company could not be considered an author under its standards.