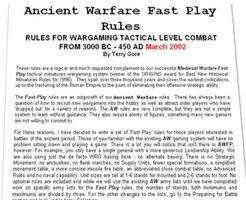 Ancient Warfare (AW) is a set of miniature rules for wargaming tactical level combat for the period 1500 BC to 450 AD. 1 inch equals 25 yards (for 15mm figures). Each turn equals 5 to 10 minutes. The figure to man ratio is 1:30. For a typical 3 to 4 hour Romans versus Gauls game this will simulate a full legion plus auxiliaries or two under strength legions plus their allies of 6-8,000 men against 8-10,000 Gauls. This equates to 300 to 400 Roman figures (about 100–130 elements/stands) and 400 to 500 Gauls (about 130-160 elements/stands). The rules are published in Letter format (8.5 inches x 11 inches) and consist of: the main rules, optional rules section, ship-to-ship combat rules, advice on playing AW solo, advise campaigns, design concepts, 85 army lists for the period starting with the "high" chariot-era armies such as Canaanite, Mycenaeans, Hittites and Egyptians and ending with the Huns and Late Imperial Romans. The rules also come with a quick reference sheet and a pre-printed green order marker sheet. There is no book keeping required, markers and element positioning being used to visually indicate unit status. An army consists of 2 to 5 Divisions each commanded by a general. Each Division is made up of 2 to 6 units; each unit consists of 2 to 8 elements/stands. Generals are allowed a certain number of order markers per turn which can be used to initiate tactical moves. Units outside a 12 inch command range need two markers to place an order. An element of randomness is introduced at deployment where the quality of the generals are determined by a set of die rolls with better generals being able to issue more orders. Orders available are Charge, Move, Maneuver (i.e. change face or formation), Defend, Retire, and Recover (from disorder or resupply with missiles). Units without orders may not move but can shoot. An order once issued must be executed, even if it puts the unit in a disadvantageous position. Orders apply for one turn. Movement is either strategic movement (outside 12 inch /30 cm of enemy) or tactical movement (within 12 inches of known enemy). Troops carrying out strategic movement do not need to expend order markers, the assumption being that they are less nervous and more controllable while they are at some distance from the enemy. Some special formations are allowed: Locked Shields, which confers an advantage in melee at the expense of speed of movement, Square, which confers morale and close combat bonus but limited movement, Testudo is similar to square but only available to Romans, who can move faster than a square, Wedge allows a close combat advantage, and Echeloned Line, which allows trained infantry to form a refused line while moving as a line. Morale and cohesion are closely interrelated in AW. As morale deteriorates so does unit cohesion. Cohesion (and hence morale) is reduced through several causes including terrain, combat, interpenetration or failed morale tests. Units test morale by rolling a D10 die, the result being modified by a series of factors. The test isn’t a simple pass/fail test. If a unit fails a test the outcome will depend on how badly the test is failed. A failure by 1 less that the required pass score may result in the unit halting disordered, a failure by 2 results in the unit retiring, and so on. Obviously, the higher the morale grade, the more chance a unit will pass its test. Units can recover from a deteriorated state. A Recover order marker can be issued to the unit during the Order issue phase. Therefore over time a routed unit can be recovered. Given a limited number of orders available to a player each turn, the player will have to decide whether to charge, maneuver, or recovering units during each turn. Shooting is calculated by whole elements/stands. An element/stand will hit its target if a D10 die achieves a high enough score. The score necessary to hit depends on the range to target, modified by several shooting factors including the target’s armor protection. Close combat is calculated on a unit-by-unit basis. Weapons, enemy armor, morale, number of ranks fighting, number of elements fighting, combat modifiers plus a random die all contribute to melee calculation. Units that suffer greater losses are pushed back 1 inch and are disordered with the winner usually following up. Units will break through morale failure or, indirectly, through accumulated pushbacks. Losses in combat or shooting will result in figures being marked as lost. When the figures lost equals the number of figures on an element, the element is removed (there are no individual figures removed in AW, figures are removed in whole-element increments only). Therefore two hits will remove a skirmisher element, three hits will remove a loose order element, four a close order element. A unit’s morale starts to suffer once it loses elements and each whole element loss through shooting or combats triggers a fresh morale test. A game ends when a player concedes or his army collapses. Collapse becomes possible when an army loses one third of its units; all remaining units being required to take a morale test. This test is retaken in subsequent turns if a further unit is lost.