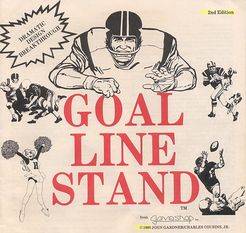 Remember Scrimmage (by SPI)? Well, Goal Line Stand is "Scrimmage done right." This is a game of tactical American football played on a hex grid field with each player represented by an individual counter. The heart of the game is the movement system, which is complex and, IMHO, realistic. Player counters can occupy a hex center, a hex side or a hex corner (vertex). Players spend movement points to move forward (straight or diagonally), backward (ditto), or sideways. Players can be facing in 1 of 12 directions. However, not all types of movement and facing are possible at all times - it depends upon where the counter is located (hex center, side or corner), and upon the position played and game situation. Some movement bonuses are available. Each player is rated for: mobility, power, blocking, tackling, rushing, running, passing &amp; pass receptions. Substitutes are available at some positions. A player may be in 1 of 2 stances: decelerated (as at the snap) or accelerated. In an accelerated stance, a player can move much farther but has less maneuverability. There are extensive rules governing illegal movement locations and player contact. Blocking, tackling &amp; rushing are resolved (after contact) with percentage dice and a variety of die roll modifiers. Movement after contact differs depending upon success or failure of the attempt. Fake and real handoffs are possible. Forward and lateral passing (fake and real) is handled in a realistic (and, again, complex) manner. Passes may be lobs, lofts or bullets - each is handled in a different way for passing accuracy calculations and the chance of a deflection or interception. Like Scrimmage, Goal Line Stand ignores the kicking game. Fumbles and penalties are not accounted for. Four learning scenarios are provided and, in my experience, are necessary to grasp this unique game system. The game still suffers from a problem inherent in the concept - moving each player in 1/2 second intervals means it can easily take an evening to play 4 downs (between experienced players). That said, it is an interesting play for true football fanatics.