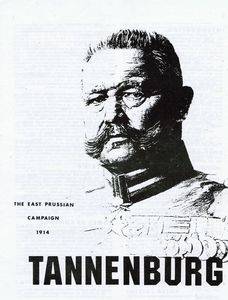 Sub-title:"The East Prussian Campaign 1914". The Imperial German Army's successful opening battles of encirclement and destruction of the Imperial Russian 2nd Army at the opening of World War 1. Contents include a Ziploc baggie, a 17"x22" paper map sheet, 2-page rules folder, die-cut thin paper counters, and a paper sheet with the Combat Results Table/Terrain Effects Chart/Turn Record Track/Reinforcements Schedule. Players must provide their own die. The map sheet is mostly tan with blue national territory lettering, forest and water features and brown for all other terrain including single &amp; double rail lines, towns/cities, borders, fieldworks, detached and ring forts, and place names. Counters are white with green print (Russians) and green with white print (Germans) and represent Brigade/Divisional level Combat units. The rules folder has a listing of abbreviations. On the back page are the victory conditions, addenda, design notes and scenarios including some optional set-ups. Additional options include: A.Stronger German 8th Army; B.Stronger Russian 2nd Army; C.Better Russian Mobilization; D.Better Russian Cavalry. The game runs from August 17th, 1914 through September 15th, 1914 and each turn represents 1 day while each hex is considered to be 3 miles across from side to side. The playing area covers East Prussian Germany down to north Russian Poland. The Russian moves first and the Sequence of Play is as follows: 1.Supply Judgement phase; 2.Movement phase; 3.Combat phase, followed by the German Player's turn. There are Special Rules for Cavalry, Landsturm, Fortifications &amp; Fieldworks, and Hidden (inverted) units. This is a very concise and easy to learn game as is most of the company's products while being one of the first produced by them to have die-cut counters.