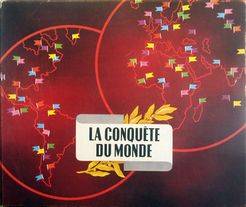 The very rare ancestor of the famous RISK game by Parker Brothers. Risk's origins go back to the summer of 1957 when Mr. Boisseau of Miro approached Parker Brothers with La Conquete du Monde, a game invented by the French writer and movie producer Albert Lamorisse, best known for his award-winning film The Red Balloon. The game board has evolved much since then!