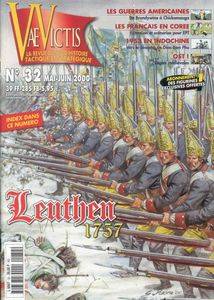 A simple game covering the December 5, 1757, battle at Leuthen, Silesia. Historically this was Frederick II of Prussia greatest victory. One player controls the Prussian army of Frederick II, the other the Austrian army of Prince Charles of Lorraine and Field-marshal Daun. One turn equals one half hour of real time and the game lasts fourteen and a half turns. One hex on the map equals 350 meters. An infantry unit represents one, two, or three regiments, or the equivalent of a brigade. A cavalry unit represents from four to eight squadrons. Each combat points equals from 500 to 800 men.