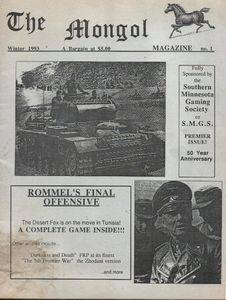 Included with the Premiere Issue of The Mongol gaming magazine produced by members of the Southern Minnesota Gaming Society. I've no idea if any further issues were produced eventually and this appears to be one of the first attempts at "Desk Top Publishing". The components for this game consist of the following: 11-inches by 17-inches paper Mapsheet; 2-sets of thick paper counters-1-GREEN(U.S., French, British), 1-TAN(Germans &amp; Italians); a Set of BASIC &amp; ADVANCED Rules; and on the BACK of the Magazine are the Map Legend; Terrain Effects Chart; Combat Resolution table; Turn Record track; and Weather effects tables. The Mapsheet, Unit Deployment &amp; Reinforcement Charts and Counters will have to be separated from the magazine while the Counters will have to be cut apart for use. The Map sheet is TAN overall with BLACK print for all terrain details. The thick paper counters have Nationality indications on top of the UNIT Type symbol, Historical Formation numerals, and basically have separate COMBAT &amp; MOVEMENT numerical designations ALL printed in BLACK. The BASIC game Sequence of Play is as follows: A)Reinforcement Phase-Advance the TURN marker one, then BOTH players conduct placement or withdrawal of any Units indicated; B)AXIS Movement; C)AXIS Combat; D) ALLIED Movement; E)ALLIED Combat; F)Victory Determination. The ADVANCED game adds Replacements, Weather Determination, Tactical Air, an Operations Phase, Headquarters Units, Special Units Abilities, Cohesion Factors, Variable Forces allowances, Operations Points Allocations, Movement through Enemy Zones of Control, &amp; Overruns. During the Operations Phase, each player rolls a single 6-sided DIE with highest die-roller going first. He then rolls a 6-sided DIE and that's how many Operations Points he uses at that time. Then the other player gets to roll 2--6-sided DICE for HIS O.P.s. After this, then EACH player will roll 2--6-sided DICE, consecutively, until BOTH decide NOT to spend anymore O.P.s. Units can be Moved &amp; then Attack including Overruns, but once they DO conduct Combat, then they're done for the turn. There is an Operations Chart with action COSTS indicated for use during the Operartions Phase. An interesting approach with somewhat novel concepts for being the first attempt at publishing a very limited run edition for this company.