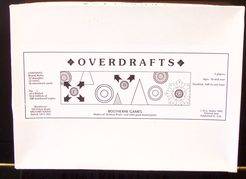 An abstract strategy game in which players attempt to cross the board. Each player has six cones and seven checkers and moves one of each on a turn; checkers move normally (one space diagonally forward) but cannot capture, whereas cones are moved using one of a set of cards. Once a card has been used it cannot be used again until all cards have been used. Cones can capture opposing cones or land on opposing checkers; this does not capture them but prevents them from moving. The object is to get a checker to the opposite end of the board without a cone being able to immediately move onto it. The first version of the game, Chafts, used a set of six cards showing Chess moves for the cones. The second version, Overdrafts, used a set of eight cards with arrows giving movement directions.