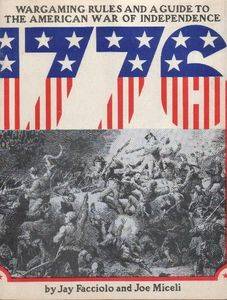 "and a Guide to the American War of Independence". A standard size booklet of miniatures rules with charts for conducting battles of the AWI. The game scale given is fifteen minutes per turn, one inch equaling twenty yards, and each figure representing twenty men. The basic organizational unit is the battalion/regiment. There are detailed explanations for unit formations with extensive tables covering British, German, French, American, and Indian unit compositions as well as including Uniform colors and rank insignia with a smattering of flags and their colors. Each of the scenarios has a map of the battle involved which would have to be produced in miniature by the players.