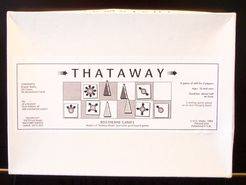 A two player abstract strategy game played on a board which is developed by the players over the course of the game. Each player starts with ten pawns on a six by six chequered board. Each turn consists of moving one of your pawns and placing a card. To begin with, pawns can only move one square forwards or backwards and cannot capture your opponent's pawns. However, once a pawn is moved, a movement card is placed onto the square it vacates. Movement cards have arrows showing possible moves - directions and lengths. The more possible directions (eight being the maximum) the card shows, the shorter the maximum move. Pawns which begin their move on one of these cards follow one of the arrows and are allowed to capture enemy pawns. When a pawn moves off a movement card, the next movement card may be placed in any vacant space on the board, in any orientation. Thus there is scope for clever placement to limit what your opponent can do. Gradually the board fills up with movement cards which show the possible moves from each square. Moves are essentially chess-like, but some are more limited, for example some movement cards allow movement in a straight line in only three directions, or diagonally in only two. The game ends either when one player has captured all their opponent's pawns; when one player loses due to having no legal move; or when all 36 movement cards are placed, in which case the winner is the one with the most remaining cones.