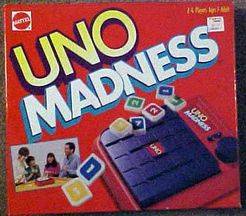 UNO Madness is an implementation of the classic card game UNO with a mechanical gimmick. The game is played on a spring-mounted tray. After latching, the tray springs when a mechanical timer expires. The tray has 24 slots lined in a spiral path; the final slot (in the centre) is labeled with the word UNO. At the start of the game, the tray is latched and the timer wound up. Each player draws five tiles and keep their hand secret from the others. The first player places a numbered tile in the first slot on the tray and starts the timer. Continuing with the next player in sequence, the players follow the standard UNO rules in playing their tiles (color succeeds color, number succeeds number, draw when unable to play, etc). They also have to say "Madness" to signify the end of their turn. Play stops when a player has played his or her last tile, has played a tile on the last slot, or when the timer expires. In the first two cases, the player records his score (according to UNO rules, summing up values of the tiles in other players' hands) and the game is reset (tiles reshuffled and redrawn, etc). For the last case, everybody keeps their hand and the player who has yet to finish his or her turn when the board has sprung draws four more tiles. Play then continues. The game ends after a certain accumulated score has been reached or a certain number of rounds have been played.