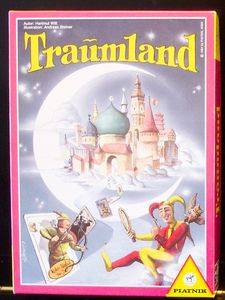 A trick-taking cardgame with themed cards from fairytales and novels. There are four color suits in the game numbered 1-11 and two special cards; the "Divine Card" and "The Dreamer". The Dreamer can be played as any value, the Divine card can be played at any time in order to kill-off a suite and can only be trumped by a 1 of any suit or the Dreamer card. During the game rounds players attempt to gain tricks by playing higher level cards of the same suit, in order to rise up on a ranking chart to level 12. Each trick won corresponds to one ranking. If a player arrives at level 12, he has not necessarily won as if another player reaches 12 later that round, that player is deemed the victor, underlining the importance of timing the trick taking.